End of Nepal monarchy - or trouble? By Charles Haviland

Nepal's most powerful parties have agreed that the 240-year-old monarchy will be abolished, yielding to a demand put by the Maoist former rebels when they walked out of the interim government three months ago.

The historic decision reverses a clause of last year's peace agreement which said the fate of the royals would be decided by a popularly-elected assembly.
Parliament must now change the temporary constitution. It will be left to the assembly, once elected, to actually scrap the monarchy - but that is looking almost inevitable. The move concludes a dismal year of continuing violence, new militant ethnic sentiment and endless political squabbling - a big contrast to 2006 which saw the end of the Maoist insurgency and, earlier, King Gyanendra's climb-down from direct rule.

Punitive acts
Although their walk-out meant elections were postponed for a second time, the Maoists say they will now rejoin the cabinet and stand in polls rescheduled for next spring.
Speaking to the BBC, senior Maoist leader C.P. Gajurel denied his party feared facing the voters. "We are committed to multi-party democracy, peaceful competition in the election," he said. But, he added, "definitely we will not go for the previous so-called parliament". The Maoists, Mr Gajurel said, wanted a new kind of parliament where "oppressed classes can compete".

Perhaps most worrying of Nepal's new troubles is the violence in the Terai, the southern plains, where an ethnic community known as the Madhesis - roughly a third of Nepal's population - is now demanding rights after years of neglect. People of hill origin, loosely known as Pahadis, have always ruled Nepal. The Madhesis complain there is no sign of this changing.

Political violence has killed over 100 people there this year.

In the city of Janakpur a prosperous doctor, Vijay Singh, dressed in a lungi like a sarong, served me tea. An assertive advocate of the Madhesi cause, he dismisses the notion that Madhesis feel closer to India, despite cultural similarities. "We are essentially Nepalese," he said. "[But] we have not been provided citizenship easily. In all the structure of Nepal, the police structure, army structure, any wing of the government, the representation of Madhesis is almost nil."

Many groups voicing such grievances have formed. Some are moderate. Some are militant, carrying out constant killings and kidnappings.
In a secret location I met Rajan Mukti, an unsmiling 25-year-old in a white shirt and red scarf, representing a major underground group called the JTMM Jwala Singh faction. He wants complete independence for the Terai. "Our liberation army punishes anyone who supports the absolute rule of the hill people. We want to destroy those Pahadi people who have absolute power and those supporting them."

'Security problem'
Ethnicity makes many a target. I visited Madhav Acharya, an old, deaf man. A militant group has confiscated the land where he grows his paddy. "More than 70% of the Pahadis here in Janakpur have left. They've been displaced," he said. "But it's difficult for me. My children are studying. I can't go anywhere else. I'm scared, but I don't know who to turn to." Conversely, Madhesi campaigners say the authorities ignore their grievances. Madhesi human rights activist Dipendra Jha fears that a new task force sent in to tackle violence is counter-productive.

"Most of the armed forces are from the hilly area," he says. "They don't know about the cultural, social sensitivity of the Terai. Most politicians perceive the problems in the Terai as a security problem rather than looking at the political, social, economic, cultural demands. So the situation is getting worse and worse."
In several other regions, too, as ethnic sentiment grows, self-defence groups are emerging in the name of different communities.

In fact, Nepal consists of dozens of minorities, geographically intermingled but now demanding a voice. They will be hoping to be better heard, as under the new agreement more than half the assembly members will be elected under proportional representation. But in a deeply uneven, caste-dominated, male-dominated society, securing real change will not be easy.

Getting rid of the monarchy may be just one small detail in a much larger process of upheaval. 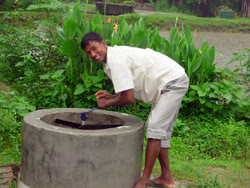 
KATHMANDU, 6 December 2007 (IRIN) - Over six million tonnes of carbon emissions could be avoided in the next five years by Nepal through large-scale use of biogas, according to climate change experts.

Biogas is a mixture of methane and carbon dioxide produced by fermenting organic matter like animal or human waste, biodegradable waste and municipal solid waste.

In Nepal, biogas systems are circular pits filled with cow dung. Constructed near to people's homes, the gas they produce is piped to where the cooking is done.

Nearly 85 percent of Nepal's 27 million people live in rural areas and around 95 percent of the rural population burn traditional fuels such as wood and agro-waste.

Biogas systems were first introduced in Nepal in the late 1950s and thousands of families now use them.

The carbon emissions thus saved in Nepal may be small in comparison to global emissions, but this is an example of how poor countries like Nepal can help combat global warming.

"Nepal's biogas use has received recognition on a global scale and hopefully the country's contribution will be given more prominence," said Sandeep Chamling Rai, climate change adviser to the Nepal chapter of the World Wildlife Fund (WWF).

Rai explained that every biogas system in Nepal avoids nearly 7.5 tonnes of carbon emissions per year. Poor Nepalese farmers and low-income rural families use the systems most.

Over 173,000 Nepali households now have biogas systems thanks to the Biogas Sector Partnership (BSP), the government's Alternative Energy Promotion Centre (AEPC) and financial and technical assistance from the Dutch aid agency SNV. 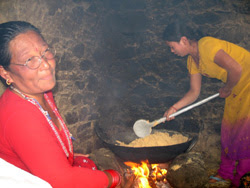 These agencies pay over half of the US$500 cost of building a biogas system and buying a gas cooker. Today, Nepal has the world's highest number of biogas systems per capita, outnumbering China and India, according to BSP.

Biogas has turned into an indispensable part of Nepal's efforts to mitigate global warming, according to WWF-Nepal.

"Biogas has already replaced the use of wood in tens of thousands of households and we can easily see how much it has helped reduce carbon emissions," said Saroj Rai, executive director of BSP.

Nepal is already earning over $600,000 per year through its voluntary emissions reduction (VER), which unlike the Compulsory Emission Reduction (CER) of the Kyoto Protocol is not bound by any UN convention, according to the BSP.

"The government has already done its job of preparing a project design document and by 2012, Nepal will have traded a huge amount of carbon," said Batu Krishna Upreti, under-secretary in the Ministry of Science and Technology.

Welcome to The Himalayan Universe

This blog will provide you some insights from the Himalayas!